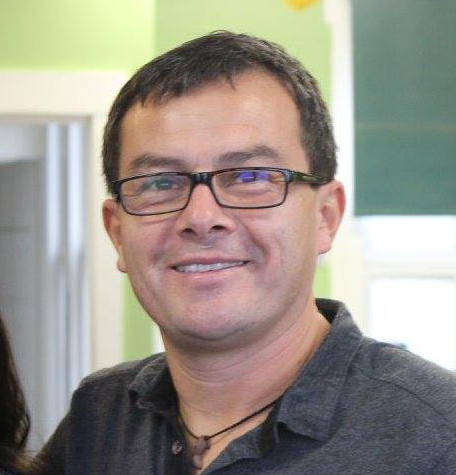 For at least the past 15 years, one of the most pressing issues in San Francisco has been housing, specifically the lack of it and the lack of affordability of it. So it seemed appropriate that we should kick off our Latino Heritage Month tribute to unsung heroes by recognizing a person who has made significant contributions in this area.

Today, we recognize Dairo Romero. Originally from Colombia, Dairo studied engineering while also doing human rights work there. He came to San Francisco approximately 20 years ago. At the time, his ex-wife was beginning to work as a psychologist. As a result his ex-wife’s work, Dairo recalls that the first Colombiano he met in the City was IFR's Associate Director Germán Walteros. Raised by a single elementary school teacher, Dairo attributes his strong work ethic to his mom who was always committed to her work.

As an immigrant on a student visa, Dairo went to Cal State Hayward. However, as an international student, he was ineligible for financial aid despite his meager income. Tuition was expensive; within four months, his savings was gone. After working multiple jobs, he began working at MEDA as a community organizer.

Community organizing seemed to be a natural fit for Dairo. Working with the Mission Anti-Displacement Coalition (MAC), he understood firsthand people’s struggles for housing and jobs. Working side-by-side with many Latinos who have promoted awareness, education and change for affordable housing, Dairo learned from the best. He fondly recalls sharing coffee or wine with Eric Quezada and Lorena Melgarejo at Radio Habana. He recognizes many leaders in the community that have contributed to his education and to the movement for affordable housing.

In fact, inasmuch as this interview was intended to share more about other facets of Dairo’s life, his attention and passion kept going back to the need for affordable housing. Whether we asked about what he’d like to see changed, what he’s most proud of, or what he’d still like to accomplish in life, the answer was the same: more affordable housing. That type of dedication deserves to be honored.

It's important to remember Dairo’s work and other affordable housing leaders throughout the MAC years. “At the time, people didn’t believe it was possible to gain affordable housing,” Dairo offers. He notes that, at that time, very few Latinos had access to affordable housing. However, that’s exactly the type of challenge that Dairo seems to thrive on. “We were able to increase the number of Latinos who gained housing through the lottery, and by training housing promotores to work with us, we were able to increase the number of people submitting applications for housing.”

He'd be the last to promote himself, but Dairo’s fingerprints are all over that victory. Through his work at MEDA, he was able to get 111 families in below-market-rate housing in San Francisco. “It’s the first time any organization has been able to do that,” he notes. “The best thing is seeing the families in their new spaces; it’s great!”

Dairo’s work to increase affordable housing opportunities in our community. While still at MEDA, he continues this work on the Latino Task Force and elsewhere. Wherever he goes, he organizes. In fact, IFR’s Executive Director Gloria Romero noted: “I go to a lot of meetings, and everywhere I go, there’s Dairo passing out flyers or talking to people.”

In tandem with his efforts to link members of the community to affordable housing opportunities, he recognizes San Francisco isn’t an option for everyone. Ultimately, the idea is for a family to own their own home, but we all know that’s extremely hard to do in San Francisco. For young Latinos and new immigrants, he encourages people to think about their housing and job needs when deciding to move here. “Latinos are still struggling to pay the rent and keep jobs. We’re still recovering from the pandemic. San Francisco isn’t bad, but immigration makes it harder.” Not surprisingly, affordable housing, well-paid jobs, and immigration reform have become his three top goals.

It’s clear that Dairo has found his calling, and our community has been the beneficiary. “I enjoy working with community. I get to work every day to help make people’s lives better.” Driving this point home, Dairo paraphrases Colombian author Gabriel Garcia Márquez: If everyone was able to work doing what they like to do, people would be happy and there would be peace.

IFR salutes Dairo Romero for his tireless work to help house our community. His labor of love is an inspiration; his selfless dedication is refreshing; and his efforts have saved lives. This Latino Heritage Month 2022, we extend our great appreciation and thanks to you, Dairo!