Karla Castillo is one of those individuals every Latinx-serving nonprofit wants on their Board of Directors. Serving on IFR’s Board for the past 5 years, Karla has a long history of activism and community-building in the Mission District. Born in Guatemala, she came to San Francisco at the age of ten.

In the late 1980’s Karla enrolled at San Francisco State University. There, her political and cultural consciousness blossomed. Karla shares, “The first few days at SF State I met a group of Latina women who invited me to a Raza Studies class; listening to lectures from amazing professor such as Don Cortez, Jose Cuellar, Felix Kury, Carlos Cordova my mind was blown away as I thought of my life experiences. I now had a name for them: racism, sexism, anti-immigrant sentiments.” 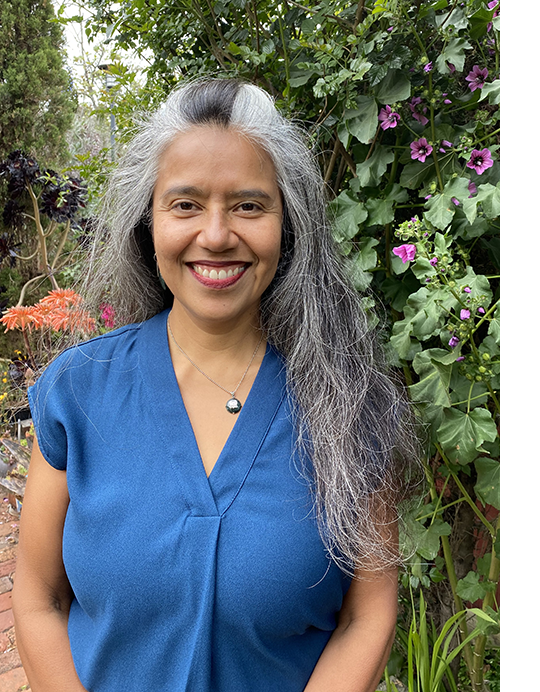 As an undergraduate double major in Health Education and La Raza Studies, Karla became active on multiple issues and organizations. In 1990, Karla heard about a job opening working with girls on Friday nights in the Mission. She was soon hired at the Mission Girls Program. After that, Karla never looked back.

“I wanted to provide an opportunity for young Latinxs to learn their history, be involved in their community and be activists. Around that time I met my partner Jose Carrasco and we created Education for Liberation, a program where young people gathered weekly to learn about their history and about resistance movements. We created a little library of books youth were able to check out, invited speakers, produced events to celebrate International Women’s Day, produced street theater pieces and took young people on youth cultural exchanges. Mission Girls and Education for Liberation set the ground for us to co-found Loco Bloco Drum and Dance Ensemble. Youth were offered free classes in dance, drum, art, spoken word and theater and gave back their vibrant energy to the community through drumming for protests, creating theater pieces that reflected the current struggles of the community, participating in Carnaval and being Bay Area cultural ambassadors on international youth exchanges.”

The rich experiences Karla had working in the Mission District Community and viewing other Latina friends and colleagues who were continuing to graduate school inspired her to pursue her own Master’s degree in Counseling at SF State. Leaving Mission Girls was hard for her but she was supported and encouraged by co-workers to continue her growth and learning.

Her first year in the counseling program required her to complete an internship. Karla chose none other than IFR for her internship site. For her second-year internship, she worked at the PHS Counseling Clinic at SF State, where she met Lupe Ávila, another incredible IFR Board member, who served as Counselor Faculty at SF State. Karla saw Lupe as a role model and mentor. After a period of time, Lupe invited Karla to think about working in a university setting. “Lupe planted the seed in my head, so when a job became available, I applied, and got it!”

In 2015 Lupe again contacted Karla to gauge her interest in joining IFR’s Board of Directors and she was elected to the IFR Board. She has helped see the organization through an ED search process, worked with Lupe to revamp IFR’s board recruitment materials, and has continued to bring an activist lens to the organization.

Karla credits the many colleagues/mentors/teachers she’s had such as Erika Roman, Tanya Mayo, Tracy Brown, Gloria Romero, Betita Martinez, Concha Saucedo, Estela Garcia, Lupe Avila, Derethia DuVal, and many others who opened the door and supported her along the way. When asked what advice she’d give emerging Latinx leaders, she offers a few pearls that served her well: “Be curious and open to many possibilities and options. Surround yourself by supportive people who make you a better person. Take opportunities as they present themselves. Don’t be scared to try new things even though it may initially be uncomfortable.”