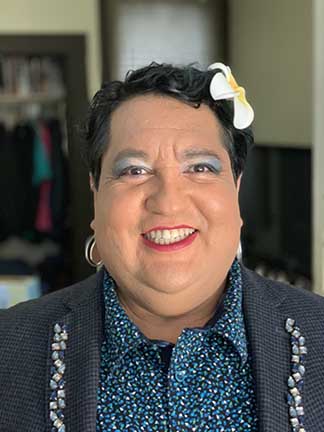 If you’ve never met Tina Valentin Aguirre, our final Latino Heritage Month honoree, you are truly missing out. To start, they know and have worked with so many of the queer and cis leaders of the 1980’s, a unique time that formed the foundation for queer Latino community and culture. They identify as genderqueer/nonbinary, and have been married since 2007, and are one of the most genuine, visionary, and multi-talented individuals you will ever meet.

Born in the Logan Heights (imagine the Mission District but in San Diego), Tina’s family was hard-working. Growing up, they didn’t always realize they were poor or discriminated against for being brown. Stepping out of Logan Heights, Tina and family were always viewed differently. Sharing with great care to ensure it was respectfully framed, Tina’s mother was born with dwarfism. As a result, Tina's family was often met with stares.

In light of the fact that we recently celebrated Coming Out Day, Pa’delante imagined what coming out was like for Tina. Ironically, it seems that, in always being viewed differently, Tina felt free to be themselves. “I’ve always stood out…I’ve gone by Tina since the 1980’s, but only got to recently change my gender marker. California was barely ready a year and a half ago to recognize me as a genderqueer person.”

Tina came to the Bay Area in 1986 to attend college at Stanford. Moving to San Francisco a year later, they connected with IFR to support Mano a Mano and the Latino AIDS Project. Tina speaks of the impact that AIDS had on him during that time. Rodrigo Reyes, the filmmaker of “Ojos Que No Ven,” became their mentor. Through Reyes, Tina discovered how many things they could do and be. Tina helped get Mission Neighborhood Health Center’s Clinica Esperanza off the ground, and they did outreach work with CURAS. When Reyes died, Tina turned their focus to their cultural work.

As with the Mission, Tina was surrounded by art in Logan Heights. Before coming to the Bay Area, they were already a writer and poet. So Tina was eager to find other queer Latinx artists. Their adventures are like a Latinx version of Tales of the City and reads like a Who’s Who in queer Latinx SF circa 1980’s. While at Stanford, Tina took a class on Chicana Feminism Muralism with Juana Alicia, San Francisco’s own renowned muralist. Juana Alicia invited Tina to stay at her home so she could introduce them to Esta Noche. They participated in a poetry group organized by Margarita Lunes Robles where she and husband and fellow poet Juan Felipe Herrera introduced Tina to people in throughout the community. (Tina knows them all, Raza!)

Throughout this time, Tina did readings at books stores and coffee shops, but increasingly feeling the impermanence of poetry. “People don’t always hear you,” Tina stated. So, next they partnered with Dr. Osa Hidalgo de la Riva, on her movie Me and Mr. Mauri which documented the stories of queer Latinxs who died from HIV/AIDS. At that time, no one else was documenting the tremendous loss in the queer Latinx community. Later, Tina partnered with Augie Robles to produce the film “Viva 16!” to document joyful Latinx spaces such as Esta Noche where queer and transgender Latinxs congregated to build community. “This was an important way to deal with our grief. Everything had changed and gentrified on 16th Street. However, at that time, the intersection of Valencia and 16th was a huge party area for queer Latinxs.”

So, Tina has been a poet, a writer, a filmmaker. When asked why art is so important to them, Tina responds: “It can be so hard to love each other in ways that are healthy. So I look at art as a way to promote that. I play a role but it’s really about the larger community. It’s about how to share love and fabulosity.”

One of the things that makes Tina so unique is that their perspective on art, like their perspective on community, is beautifully multidimensional. Art includes that which they create, but then, it becomes a lot more. Literally and figuratively, Tina is also a curator and benefactor of the arts. “I love being a mentor, meeting new artists and helping connect others. It’s important to share cultural references. It can get lost if we don’t talk about it.”

They have gone on to find new ways to build community. Tina has also shared some of their fabulosity as a board member of LYRIC, Shanti Project, and the GLBT Historical Society. Just recently, Tina was chosen as the first manager of the Castro LGBTQ Cultural District. This is a BIG deal! “It’s all about community-building. It reminds me of working with QueLACo (Queer Latino/a Artists Coalition) with Virginia Benavidez. This position blends all that I’ve wanted to do.” (More oldies but goodies!)

With such a unique history, we had to ask about their message to others who may be struggling to be fully recognized and valued. “If you’re struggling with people who can’t see you or recognize your magic, don’t worry. They are not your responsibility. Eventually the world will catch up to you. Resilience is important. It’s important to surround myself with loving friends, take care of myself, and don’t forget to laugh and have fun.”

Tina hasn’t decided on specific future goals, except for the part about knowing who they are and what they have to offer.

“The world is just catching up to me. Younger people know exactly what I am. I look forward to connecting with more people and doing more great community work and art.”

Pa’delante honors Tina for Latinx Heritage Month because of the magic and fabulosity they have contributed to the community since the 1980’s. They became deeply involved in a time of Latinx history that should not be forgotten. They stand proudly and courageously as themselves to show the beauty of an important part of the larger Latino community.

“I like to model fearlessness. Some of us have it in us to jump in when we don’t know what’s going to happen but we know our work is needed. You don’t have to have all the answers, somethings you need to just show up, and help.”

What, more than this, reflects the true spirit of leadership, courage, and love of community? Gracias, Tina.