“It's up to us to make the change our community needs.” That’s what Olga Talamante, Executive Director Emeritus of Chicana/Latina Foundation, said to herself after reading a particularly heart-wrenching ACLU report on family separation and immigrant detention in late 2020. “After reading the report, I couldn’t sleep. I was beside myself, and knew we had to do something. I didn’t know if we should go and chain ourselves to ICE offices, hold sit-ins or drive down to protest at the detentions centers; I just knew we needed to do something.”

So, she did what all good community organizers and leaders do. She began making calls to her vast network of activists, allies and friends. 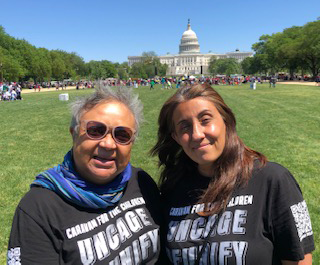 Many of the individuals who attended that first meeting agreed with her. There were lots of roadblocks, starting with the pandemic and upcoming election. That didn’t stop them. Slowly but surely, the concept of a caravan emerged. After several discussions, the campaign was named Caravan for the Children: Uncage Reunite, Heal.

The original plan was to drive to Washington DC, via Texas and Georgia, with people joining them along the way, honking and contacting their elected Congressional leaders, and bringing increased attention to the issue.  Conceived in a pre-vaccine environment, the campaign realized it needed to change gears and decided to go to the border.

Not to take anything away from the Amazonas these women are in their own right. They have all displayed their leadership talents and community commitment many times over. And yes, CARECEN’s ongoing stellar immigrant advocacy makes complete sense. But who would expect a diverse group of organizations, alternatively focused on education, the arts, community health and wellness, and racial equity to come together to lead the fight against family separation and detention?

“This wasn’t how we initially designed the campaign,” noted Olga. “I made calls to individuals that I knew cared deeply about the children but didn’t know who would respond or what we might do. Sometimes things just fall into the right place.” As it turns out, the perfect coalition of organizations officially became the campaign participants.

As Gloria notes, “We were all moved to action when we saw children fenced in, laying on the ground with aluminum blankets. Even though we all support children and families in different ways, our sisterhood and connection to each other proved to be a powerful force. We were able to leverage all the talents and expertise each organization offered. It seemed we came together organically with an action-oriented approach to share our unique expertise and diversity that enriched our thought partnership.”

In fact, it was the collaborative organizing of this unique group of organizations that made Caravan for the Children stand out. And it started with its co-chairs.

Olga and Gloria were familiar with each other’s work but hadn’t worked together before. Keep in mind, at the end of 2020, Gloria had just been newly hired as IFR’s Executive Director. So, she was surprised to get a call from Olga asking her to become Co-Chair of the Caravan for the Children Campaign. Gloria’s response was a familiar one heard in many progressive circles: “I can’t say no to Olga.” In fact, Gloria readily offers, “It has been an honor to work closely with Olga and learn from her. We agreed it was important for IFR to be involved to ensure the campaign could also focus on healing.”

Explaining her thinking, Olga shared, “I thought Gloria needed to be Co-chair because she is now the leader of an amazing organization. She had a history of work in different positions in the community and she exemplified “leadership from the community, for the community.” Since then, I can’t express how much respect and cariño I have for Gloria. It has been a great working and personal experience working with her and getting to know her. I couldn’t have asked for anything better. It has been key to work together to provide leadership and structure to the Caravan Campaign. I think it’s part of why we’ve been successful.”

Even in the midst of recognizing the great trauma and injustice facing separated families and children, watching Olga and Gloria in action together has been both comforting and heartwarming. They offered the perfect case study on organizing based on shared leadership, mutual respect and affection, and a continuous clarity of purpose. They agree that there has been something special about the consultative and non-oppressive approach their leadership brought to the campaign.

“I think there’s something to why the campaign worked so well. If you’re going to work in coalition, it may be a good idea to bring in different angles and look at your structures to see how you’re working together,” offers Olga. Nodding her head in agreement, Gloria adds: “I think we all learned a lot. Our respective organizations have our standard ways of operating, but coming together, we all accommodated each other. For example, CARECEN had its own way of conducting advocacy, but Galeria’s artivism contributed to it and brought a new and refreshing energy. Some our best successes were unplanned, like the great interest by some members of the SF Board of Supervisors and other public officials to join our Caravan. The Caravan could be a model for this kind of community/government collaboration.”

In fact, much of the Campaign evolved to reach a growing number of people. Several Latinx musicians, dubbed “the Community Songbirds” joined the Campaign on their trip to the border and Washington, DC. National funders, local community sponsors and sister organizations enthusiastically supported the Campaign. An online petition for the Campaign has already collected 1,700 signatures and continues to grow. Media attention has ranged from TV and newspapers in the Bay Area and San Diego to publications as far away as the Boston Globe.

Demonstrating their commitment to shared leadership, Olga and Gloria emphasized the talent, skills and unwavering commitment on the part of the entire Caravana Committee. “The staff teams from each of the anchor organizations are the backbone of the policy, safety, budget, communications, program and arts committees. They are the core and heart of our Caravana.”

When we take action on behalf of our community, we must keep that as our north star. There must be a heightened consciousness that we ned to be willing to undertake these issues. We must have the ganas, the passion and the structures to do the work. We have to learn from the things that work well. We can build allies and get the resources. That’s what the Caravana for the Children accomplished.