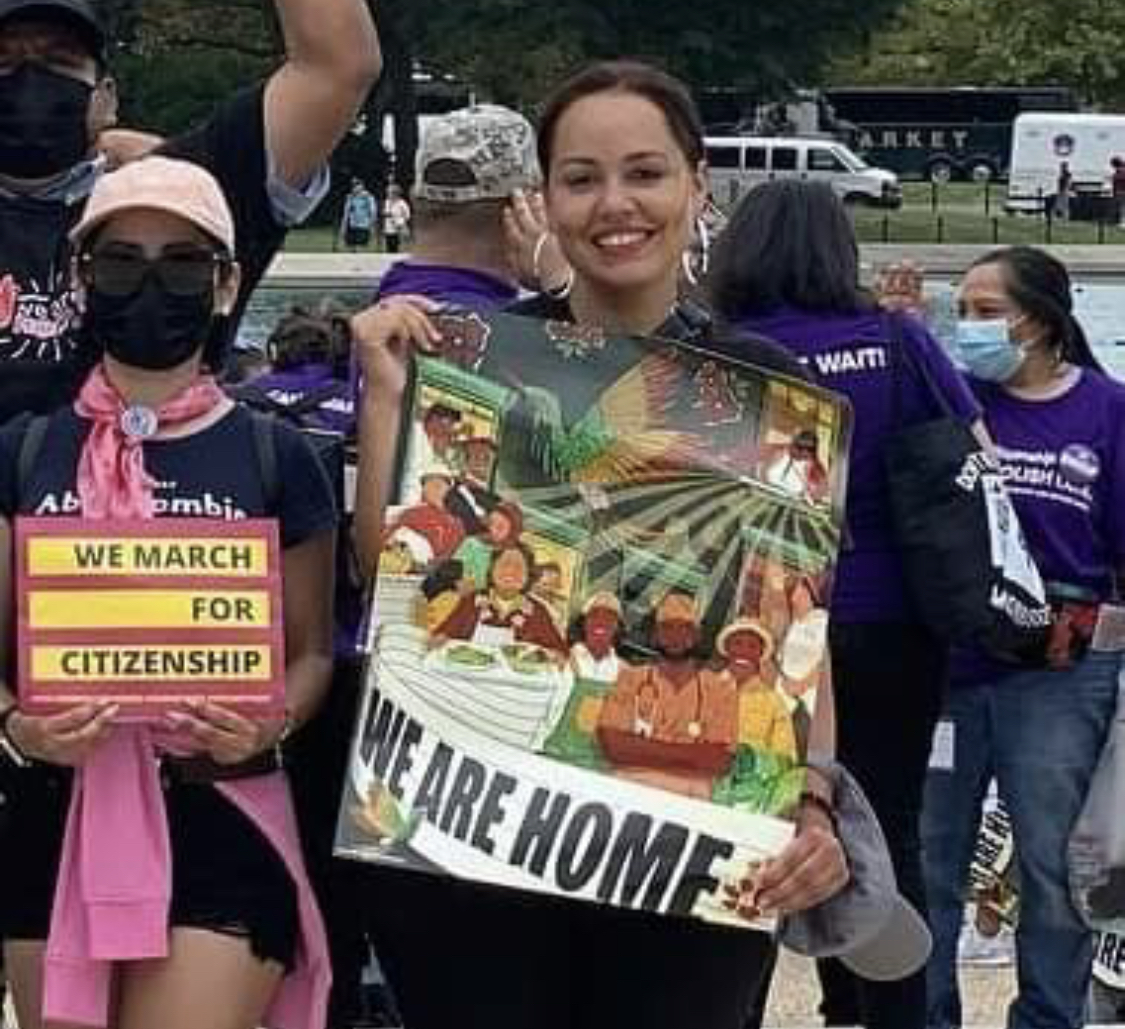 IFR’s fourth and final honoree for Latino Heritage Month 2022 is sincerely dedicated, politically savvy, fiercely proud of her DACA status, and young. If it wasn’t that she says she’s not interested in running for office someday, we could easily be talking about a future President.

This description could only apply to someone as accomplished as Sarah Souza, IFR’s fourth honoree and unsung hero for Latino Heritage Month 2022.

Sarah came to the US from Brazil when she was 15 years old. Her single mother had come to this country two years earlier to work to support Sarah and her sister Adriana. Sarah is proud and protective of her mother’s many sacrifices during this time. “My mom had to work since she was 7 years old to help provide food for her other siblings. Giving her a hug after being separated from her for two years was the best moment in my life,” she shared.

Portuguese was Sarah’s first language when she came to the U.S. “I had to learn two languages. Of course, I had to learn to speak English. But I also had to learn Spanish so I could make friends and survive with others who faced the same barriers as I was.” Graduating from Mission High School in 2005, Sarah struggled to figure out how to go to college. As an immigrant, her only option was to pay tuition rates for international students. In addition to supporting her family and attending college, Sarah worked as a nanny and a janitor, paying taxes for services she was barred from accessing.

As a college freshman, her uncle was arrested by Immigration & Customs Enforcement (ICE). Because ICE now had the address for Sarah’s family, they were forced to move. To avoid deportation, the little family lived in the basement of her mother’s employer. The terrifying memory of that period has stayed with her.

Sarah proved to be a star in college, obtaining a Bachelor of Arts degree in Political Science and two years later, obtained a Certificate in nonprofit management. She went on to graduate school at USF, earning a Master’s degree in Urban and Public Affairs in 2017. Two years later, Sarah and her sister had obtained DACA status. While Sarah noted that being a Dreamer doesn’t provide her permanent protection, she was also saddened that her mother had no protection at all.

Using her newly developed skills, Sarah got involved in the community, such as working as an intern at La Raza Centro Legal to helping Spanish-speaking seniors obtain legal support. Armed with a master’s degree and speaking three languages, Sarah could likely have had her pick of professions. However, she remains committed to honoring her immigrant status, and shares her plans to write a book. “Immigrants are often victimized and used in elections. My goal is to share the power of one immigrant story, of what is possible despite the challenges, and how we all must fight to ensure we have a platform to share our stories. We are intersectional; we care about housing, health, and a living wage. However, we’re often framed as static. They never tell the story of immigrants as human beings. That’s the story I want to tell.”

And that’s the story her life continues to reveal. She has a clear perspective on how immigrants are perceived and spoken about. “I get very offended when people speak about DACA recipients as deserving of pity because they didn’t have a choice to come to this country. We’re not victims and our parents are not criminals.”

Sarah became actively involved in politics around 2014, supporting candidates, learning the ropes of phone banking, visibility, and other campaign activities at local and state levels. She is a past President of the San Francisco Latino Democratic Club, and past Board President of La Raza Community Resource Center. And let’s not forget her day job – working as an Aide to San Francisco District 3 Supervisor Aaron Peskin. 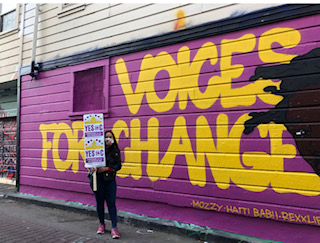 In each instance, Sarah seemed to leverage her newly acquired knowledge and skills to prepare for even more impactful results. Her greatest achievement to date came in 2020 when she and co-chair Gabriel Medina put Yes on C, Commissions for All on the ballot. This measure would allow immigrants to serve on City Boards and Commissions. This had been attempted in 2002 by then-Supervisor Matt Gonzalez and had been defeated. For anyone familiar with what it takes to win anything in a citywide election, you understand what a monumental challenge it is. Sarah shared several challenges she faced, including personal and structural challenges. “I was the co-chair of this initiative, but I wasn’t allowed to sign the form to put a ballot argument in the voter pamphlet.”

Nonetheless, Sarah would not be deterred. She was sad that she didn’t receive as much support as she’d hoped but was inspired by the support she received from various immigrant groups.And on November 3, 2020, despite the enormous challenges, Commissions for All won by 54.5% of the vote. Shortly thereafter, Sarah was appointed to the Immigrant Rights Commission.

Since then, utilizing her great mobilization and organizing skills and community support, Sarah has since helped secure the right for noncitizens to run for the local Democratic County Central Committee as well as a delegate to the California Democratic Party.

This is why Sarah is IFR’s unsung hero for Latino Heritage Month 2022. How many young adults – or older ones for that matter – have made such impactful contributions? How many have faced nearly insurmountable odds, done their homework to as prepared as possible, and undertaken to enfranchise the disenfranchised?

Of course, we all wonder what Sarah’s future holds. Beyond writing her book, her future is open. “Everything dependent on my status. I hope I can go back to Brazil to someday to see where I was born; this means we need to have immigration reform for that to happen. I want to continue fighting for immigrants and making an impact. I vividly remember what it was like to be displaced and live in a basement, so I’m also interested in addressing housing security and homelessness. Oh, and statewide rent control.” No low-hanging fruit or easy challenges for this woman.

Given her many accomplishments, we had to ask if she had any advice for others seeking to have a positive impact on their communities. A young woman with an old soul responded: “Identify the mission, what drives you and how you want to impact your community. You often have to fight multiple times, and sometimes, you will receive attacks. Be sure to have passion for your community to keep you going.”

Thank you, Sarah, for your passion, courage, resilience, and determination. You are a true warrior. Your efforts deserve to celebrated by all. We at IFR are honored to share some of your many life accomplishments with the community during this Latino Heritage Month 2022!